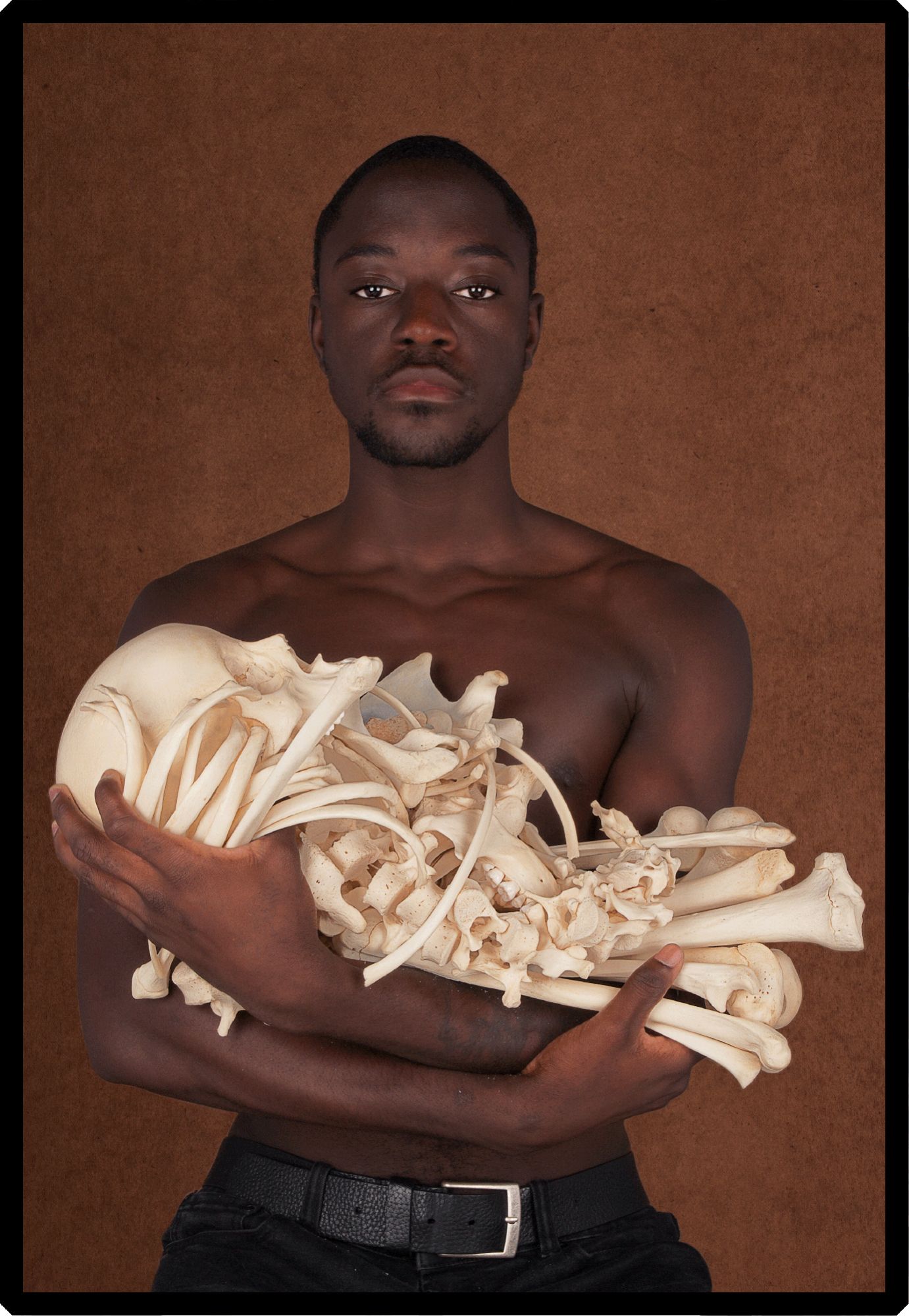 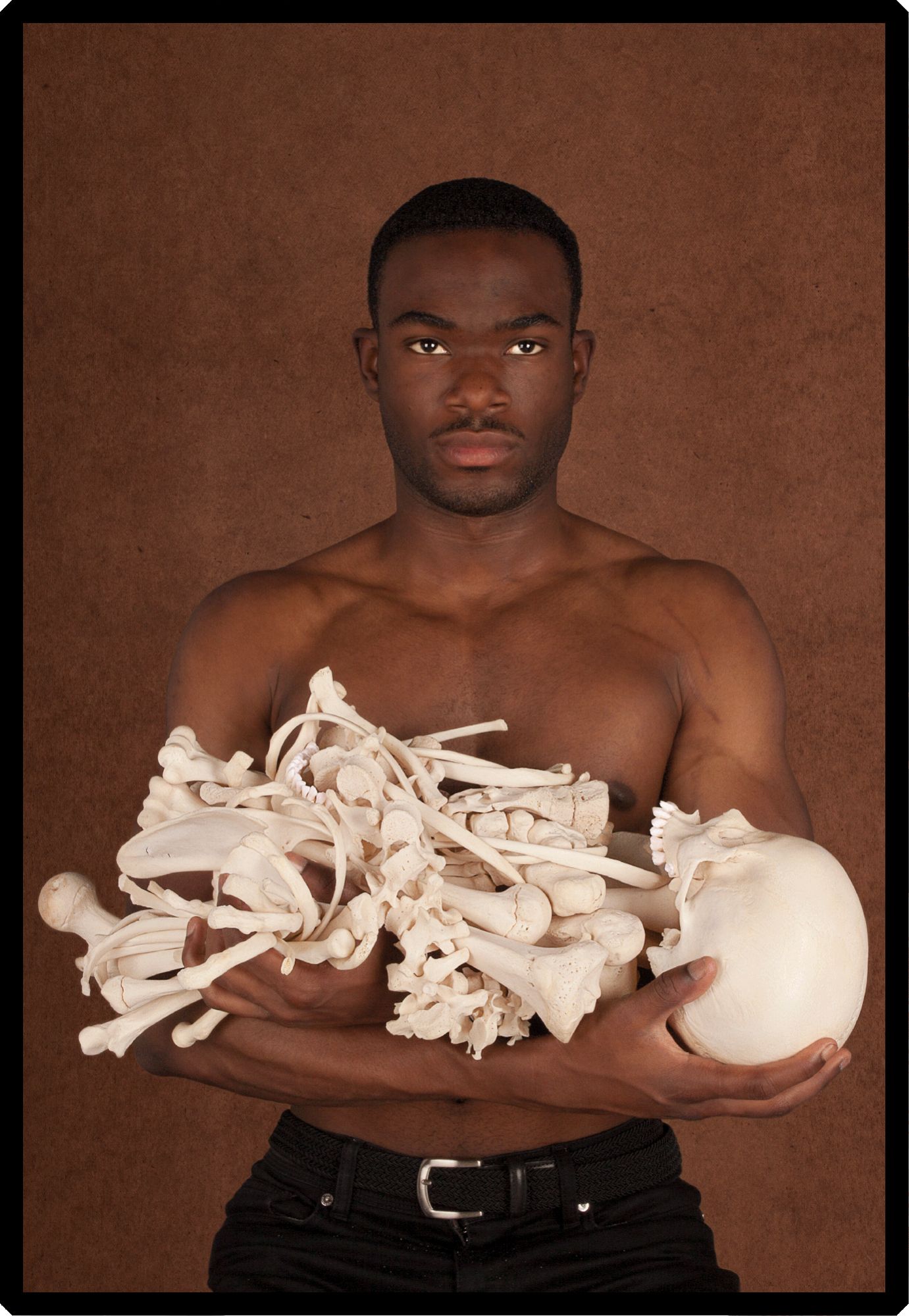 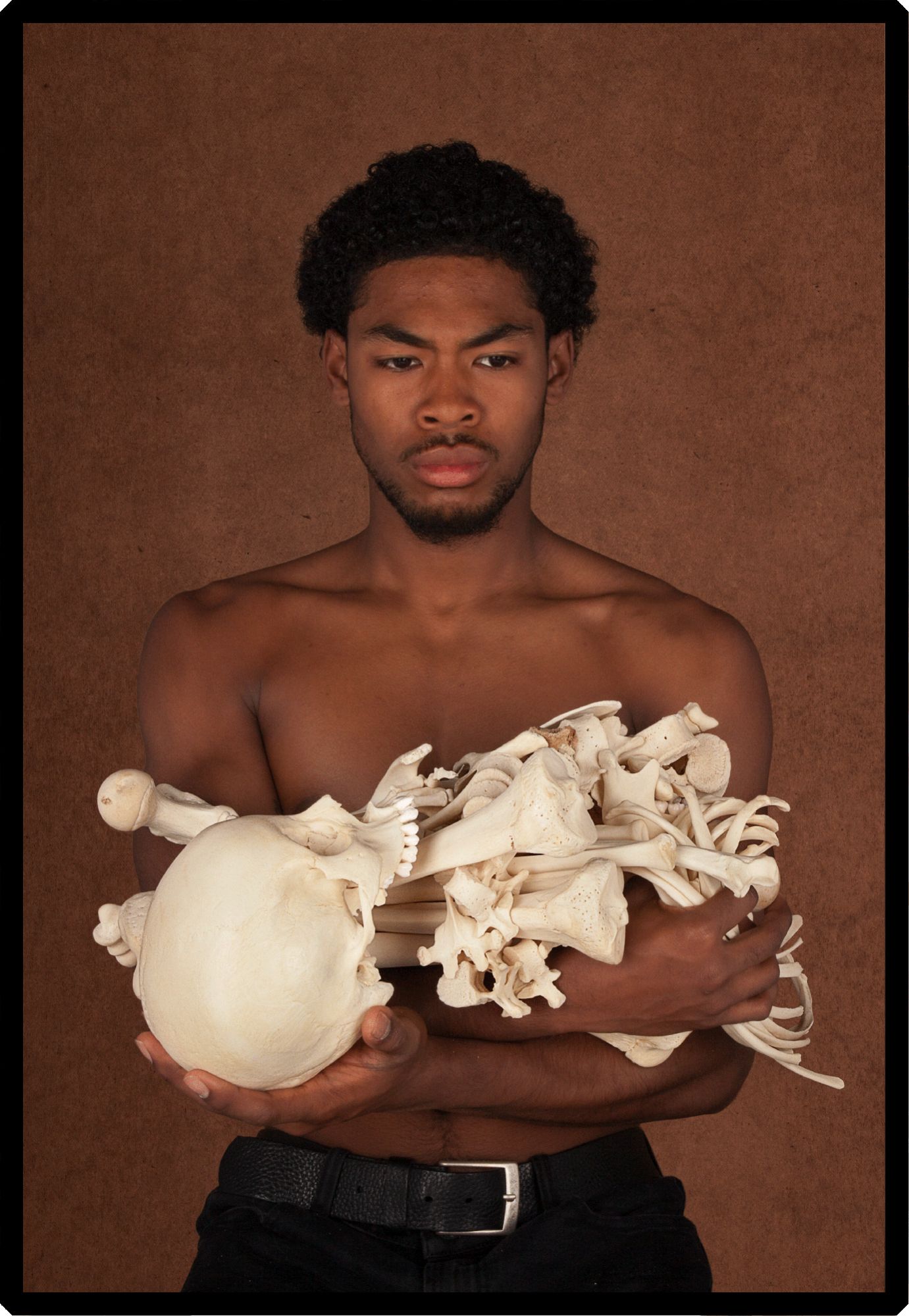 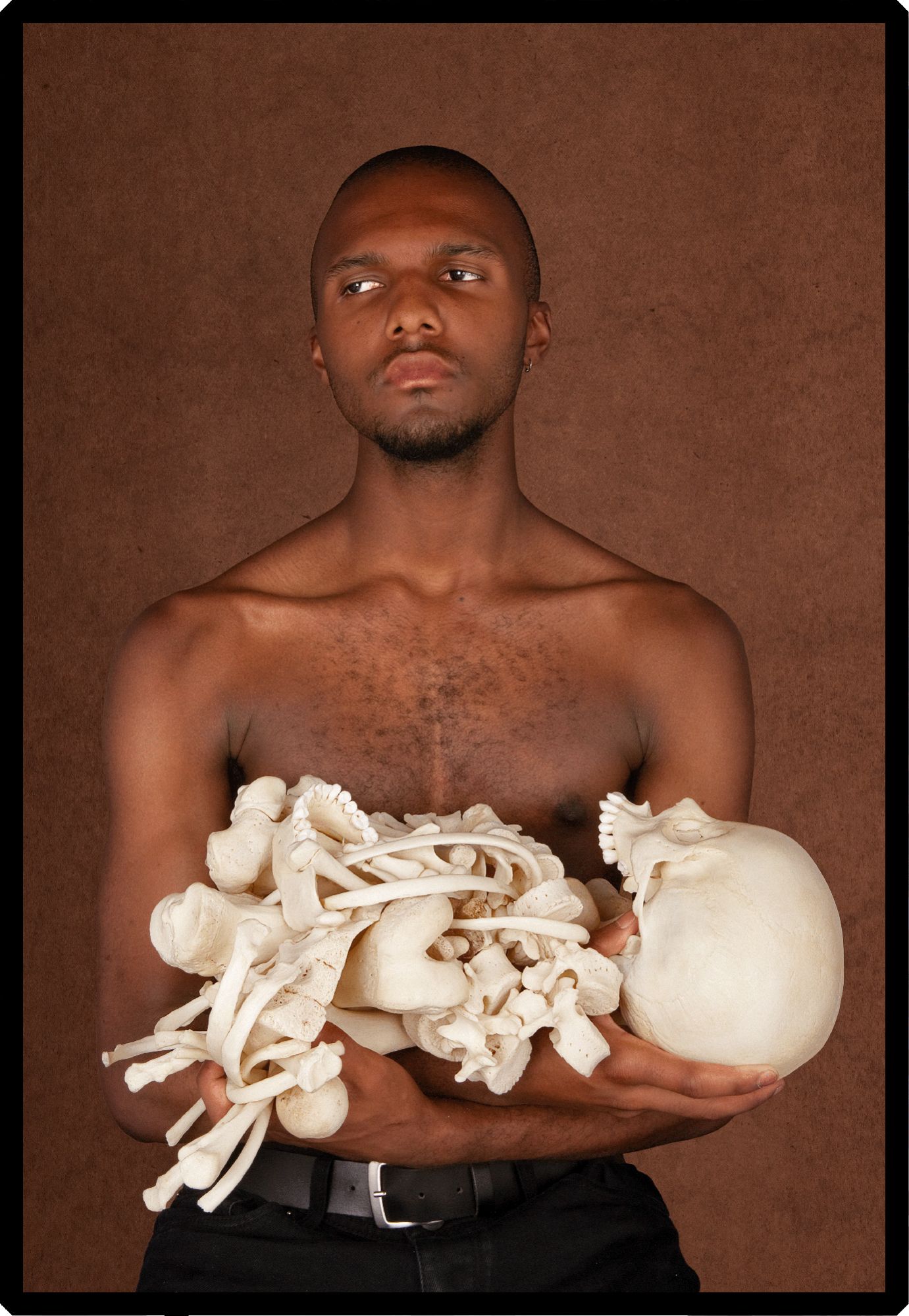 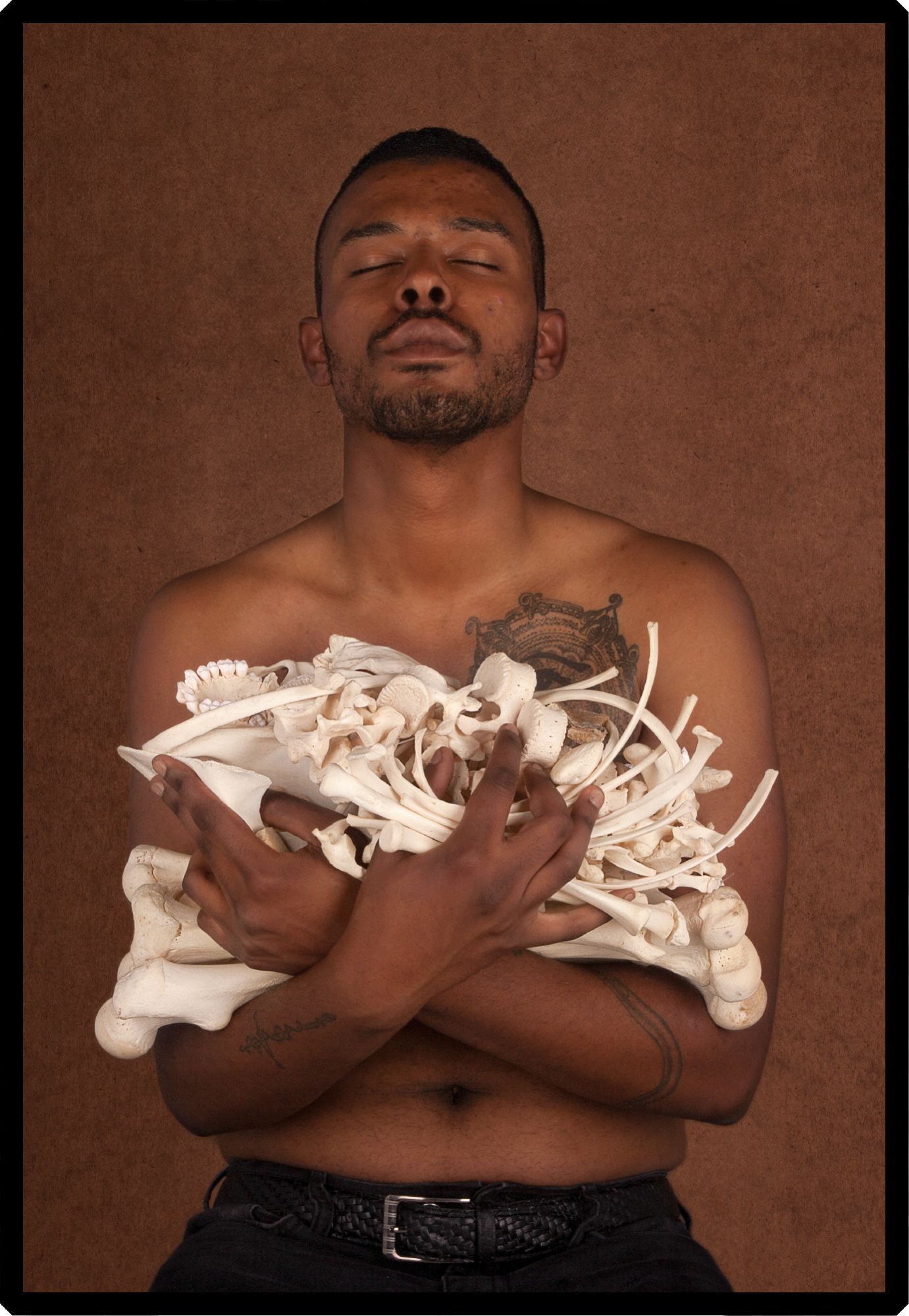 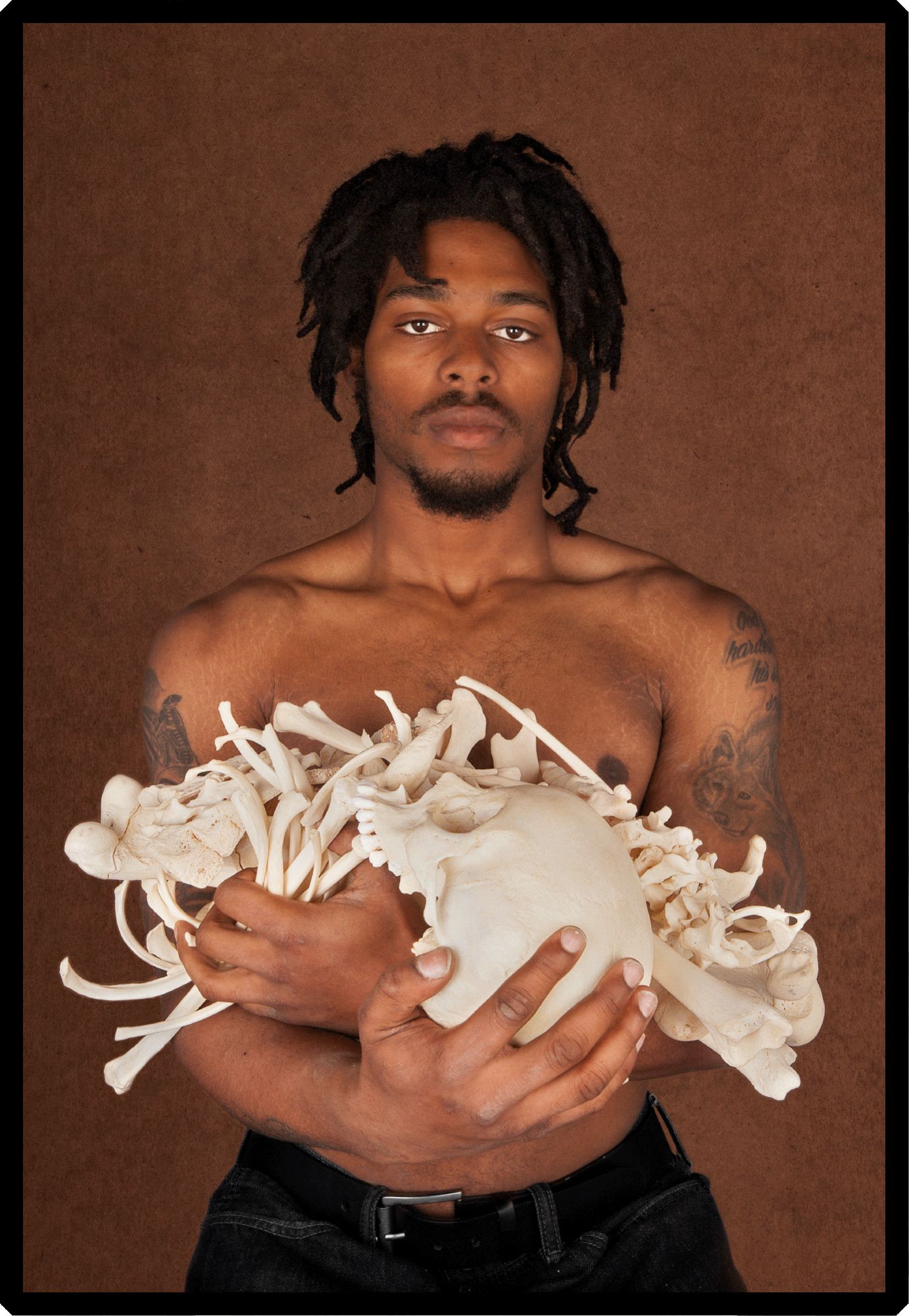 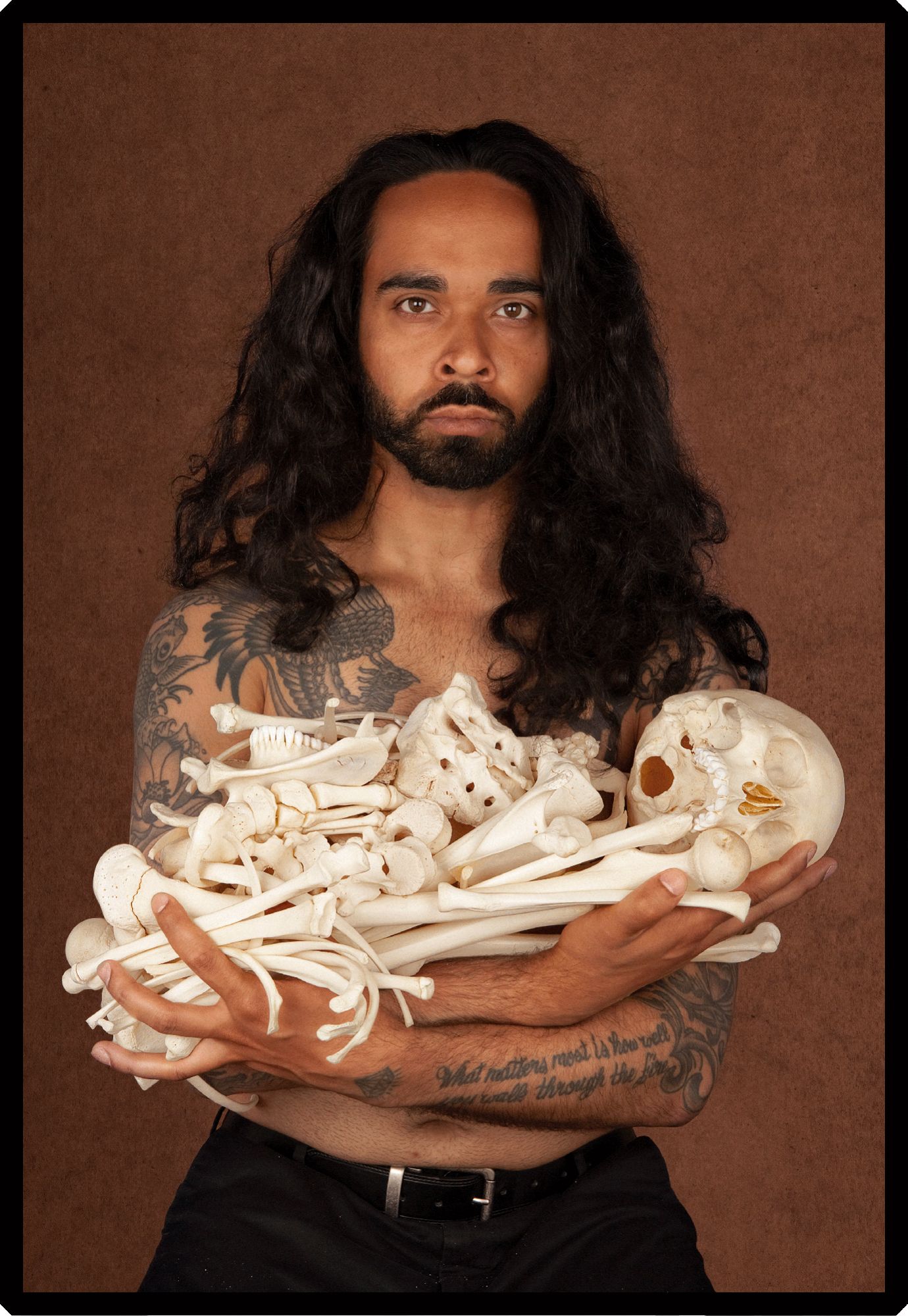 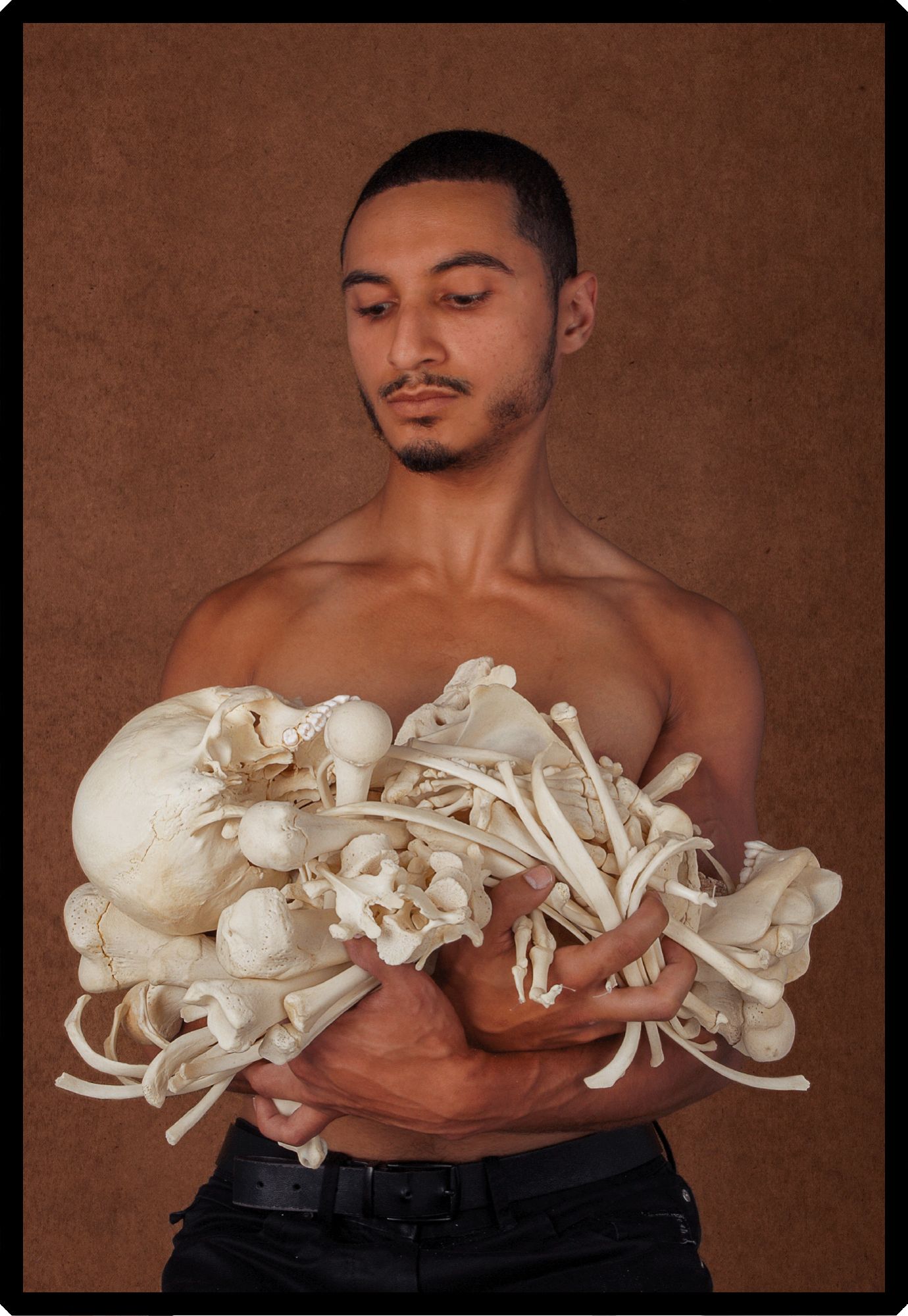 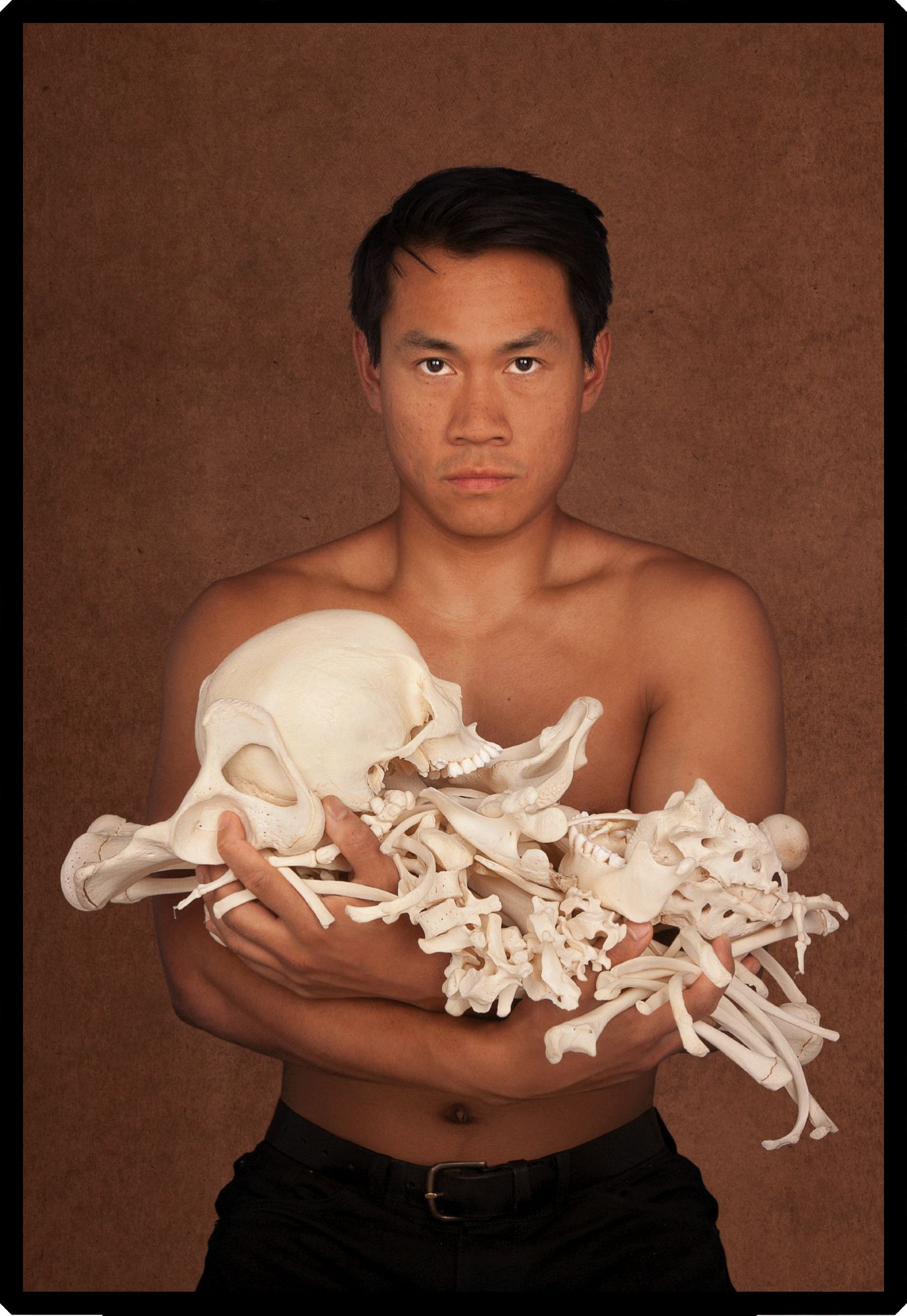 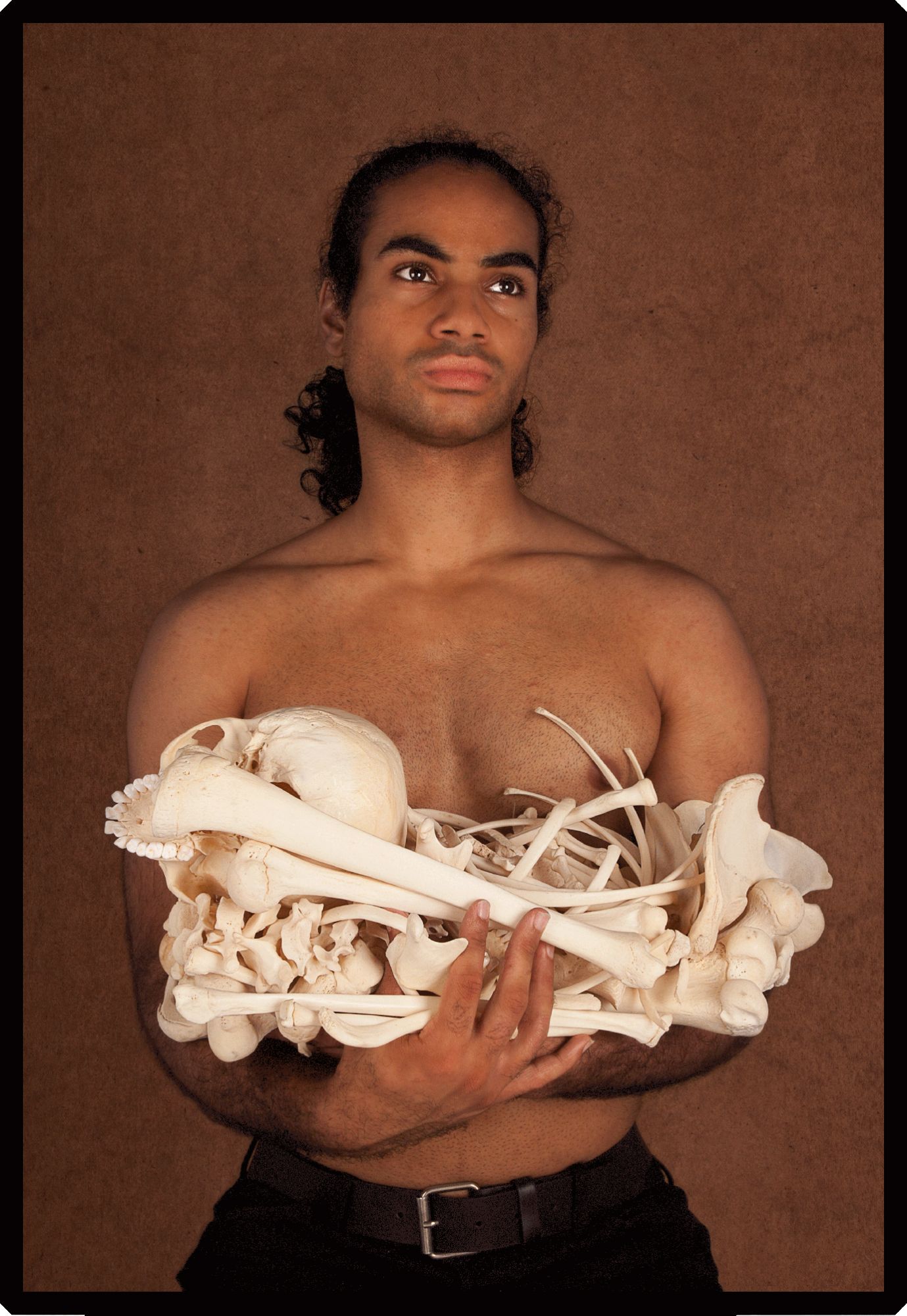 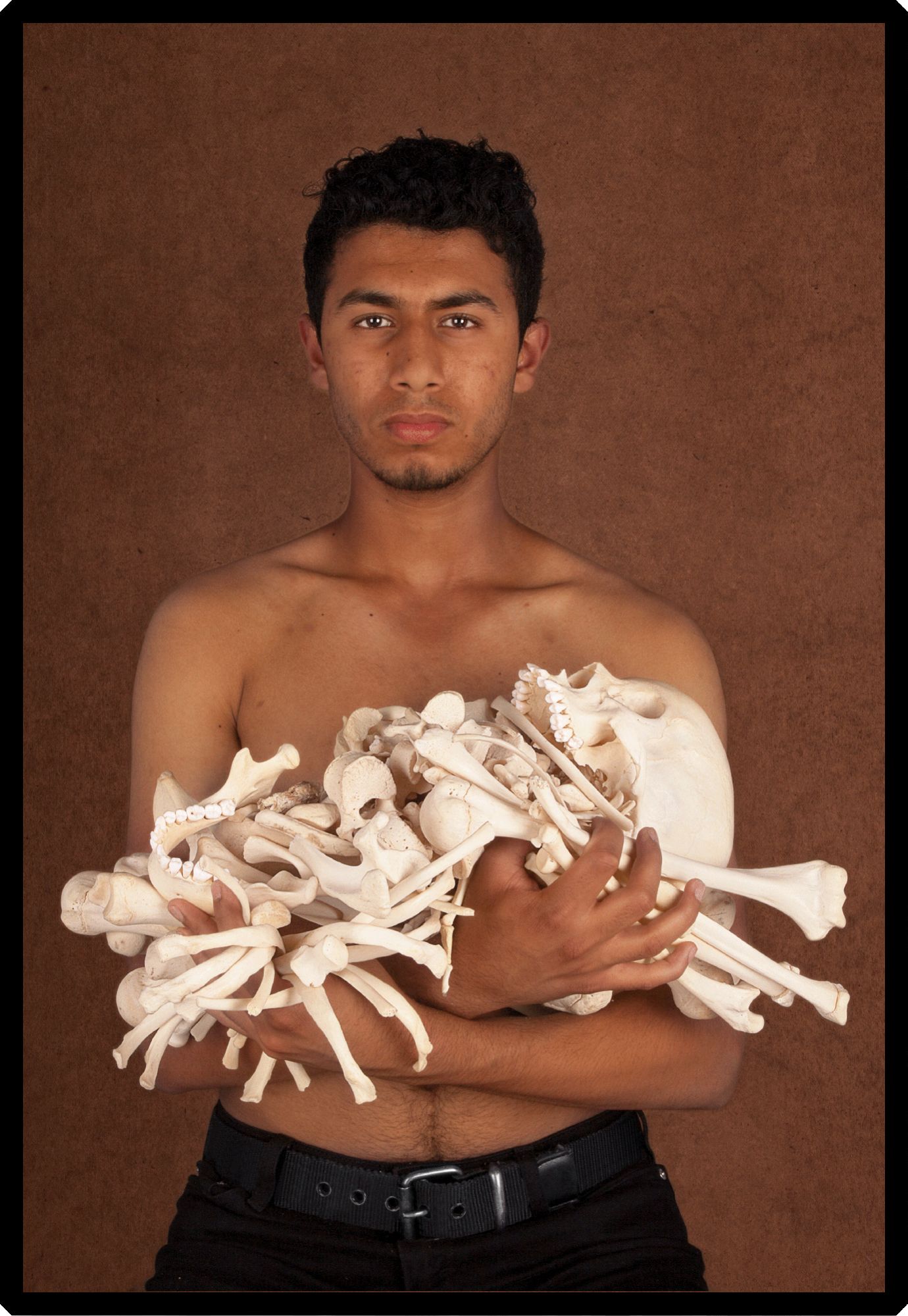 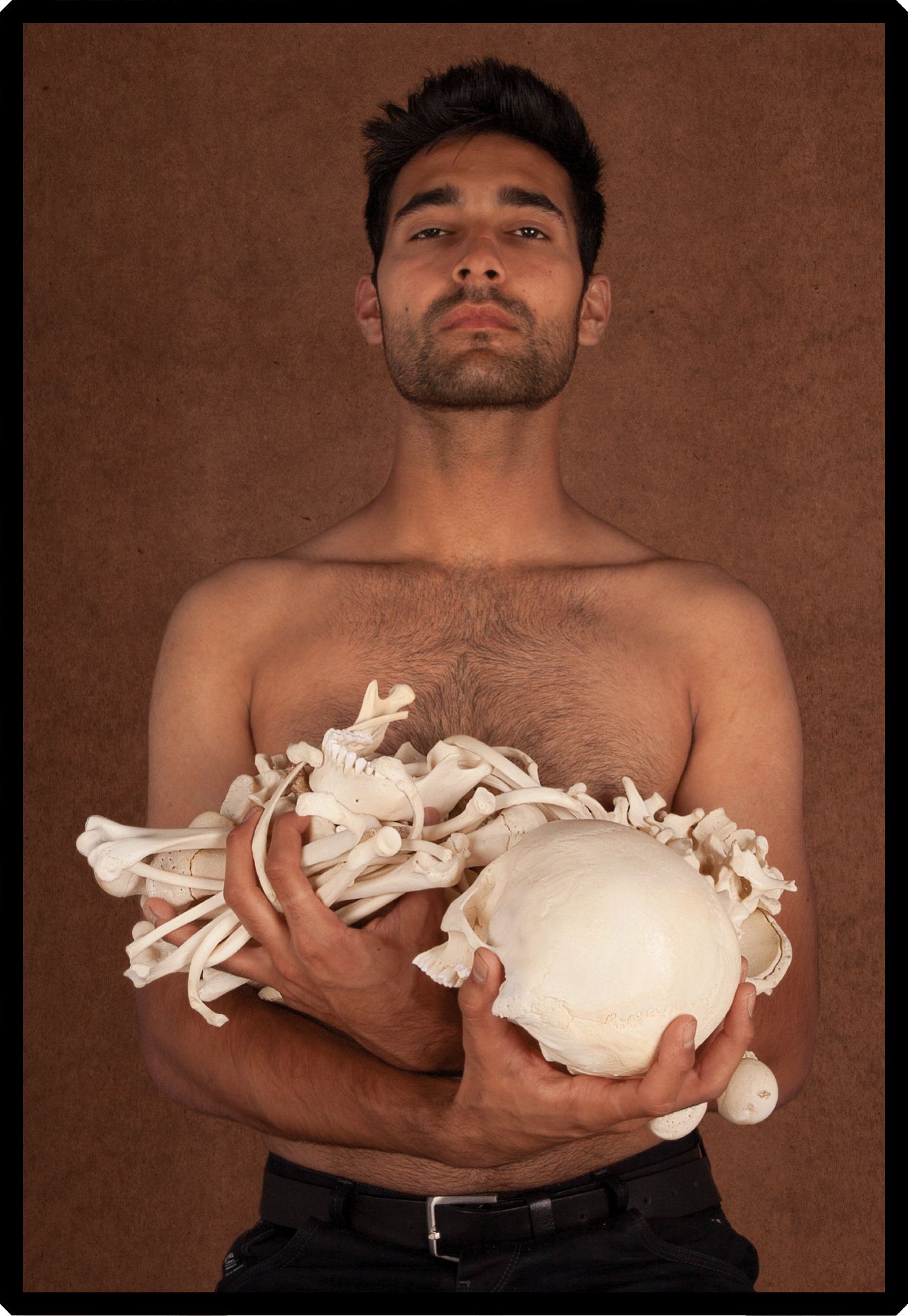 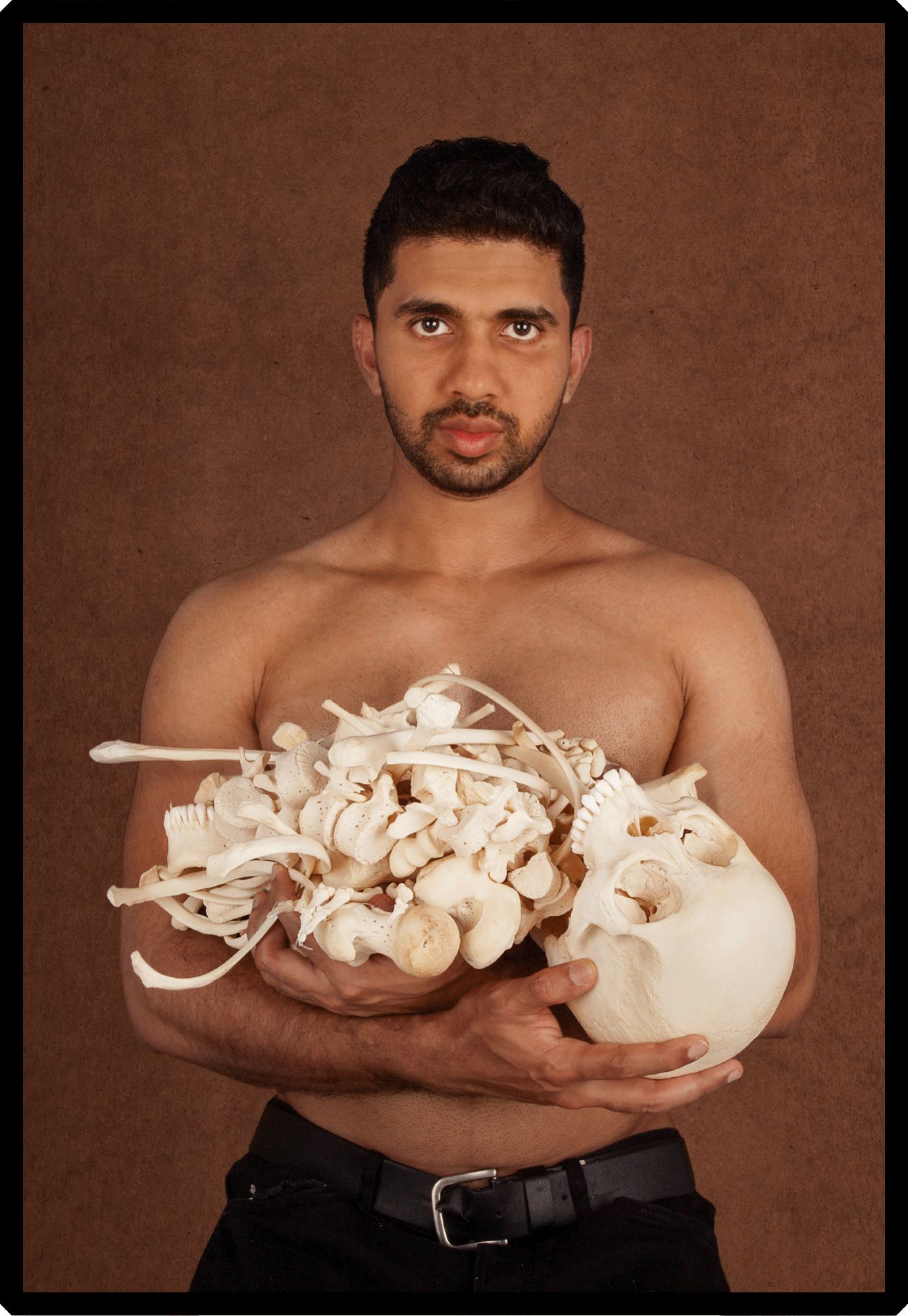 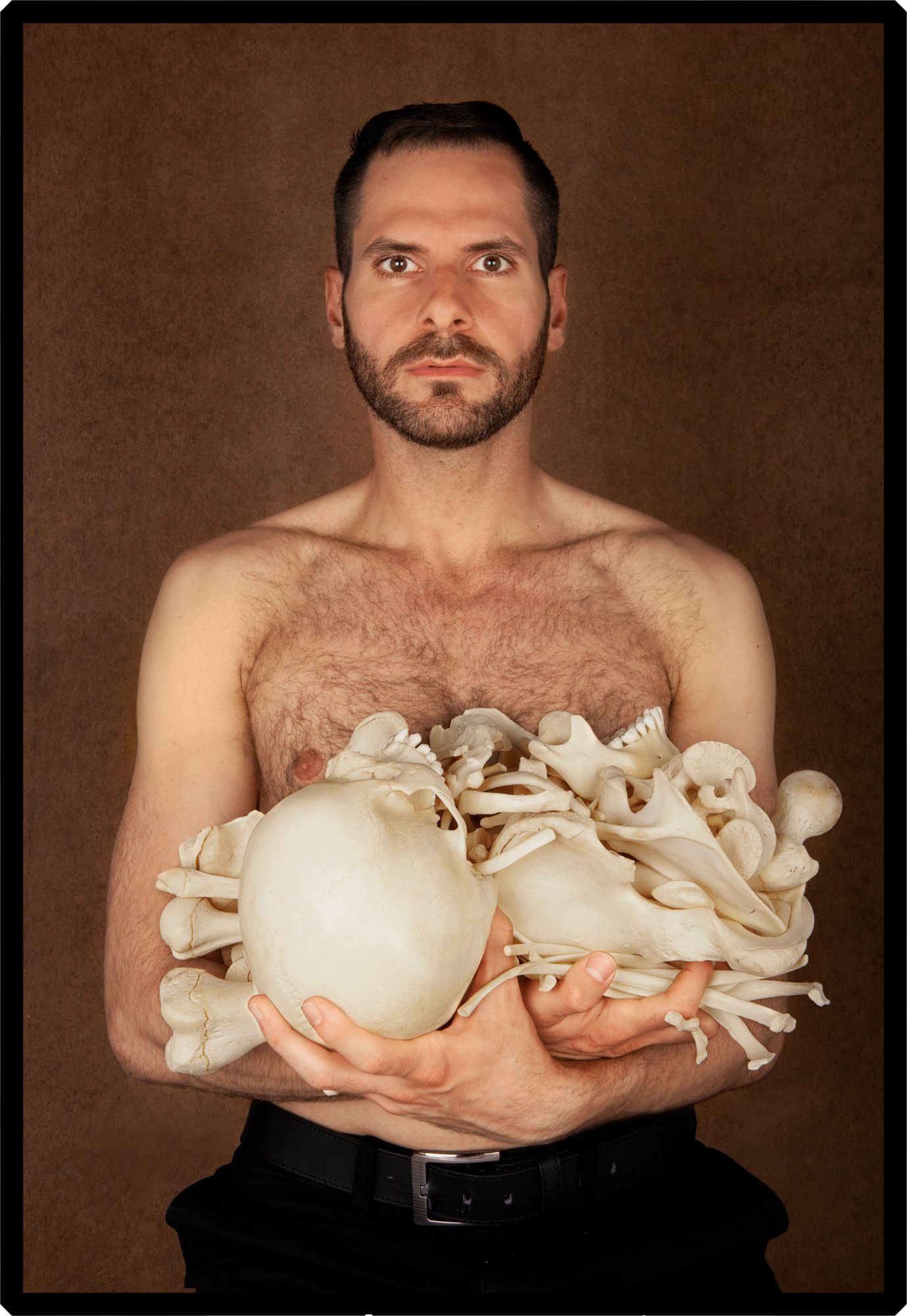 My work with human bones is at once spiritual, material, political and instrumental to aesthetics. 2015, when I began this work, collective sociopathy was gaining momentum down south and Canada was eager to get on board. Our own school to prison pipeline designed to detain indigenous, black and brown youth on a whim, was on its way to US style industrialization with emerging prison privatisation in Canada. The NATO war on terror was raging abroad and at home. We were murdering people in the global south under the cover of our alliance while rationalizing bombings of far away villages on humanitarian grounds. Our then Prime Minister Stephan Harper campaigned on openly Islamophobic policies and jailing asylum seekers upon arrival –the very people that the NATO terror war was propelling into flight. Afghanistan, Pakistan, Palestine, Iraq, Syria, Libya, Mali, Sudan, Somalia, Yemen destroyed. They bombed an MSF hospital. They said sorry. Then came all those ISIS beheading videos staged in cinema style with perfect production continuity –wind whipping clouds of sand across level horizons of earthy expanse… all circulating “below the radar” in “social media”. I’m an artist. Artists are addicts for attention. We know how people work really hard to become the needle in the haystack. The way was pointed and we all looked. Few knew that it all bubbled up through a single scrubbing agency on the Washington dole.

Media taught geography of the Middle East. We became experts in history, in world domination, in Colonial strategy, foreign policy –the Sykes Picot line. We ate the bread and enjoyed the circuses. Some of us cheered, gossiped, discussed and argued. Some of us generated informed opinions. Some remained indifferent. Others became incensed and bonded over common indignation.

A passenger airliner disappeared into thin air. A resident of Ottawa's Salvation Army mission for men shot and killed a ceremonial guard just as the city hosted the annual NATO training games. He in turn was killed in a heroic shootout on the hill. US media outed the event as an act of radicalization. Where was our investigation, our Press? I wondered who wrote that script. I began obsessing on public deception –on how global news product had become gladiatorial and the messaging divisive. One must assume motive into outcome. Everyday digital lynchings became normalized. Hillary’s fist-pumping video celebrating the news of the 2011 public torture, sodomy by baynonet, and murder of Libya’s Muammar Gaddafi recirculated in preparation for the US election. Narrative fodder for global media product, right? Obama had a kill list. They called it the Disposition Matrix, rendering... Individual people living real lives here and there can become very quickly disappeared –abstracted into statistical bodies de-personed into a number. Disposable people. Remote drone soldiers fell into PTSD. Their defence budget bloated. Their street cops got the hand-me-downs. They shot to kill for the crime of brown skin.

How I pined for the old days of CRTC Canadian media content quotas. Stick my head back in the sand. Has the human capacity to process narrative been overwhelmed by the flood of Internet communications?

Here at home in Toronto, the local morning gun violence reports began to read like the weather. In the city you can have a very bad day.

A homicide detective, seeking street front surveillance video from my dummy dollar store camera, left his calling card in my mailbox. A couple of neighborhood teens had murdered their mate for a slight that had occured already over a year ago.

I became broken-hearted for the world. As advised by any next generation offensive strategist, and David Attenborough too, the great observer of nature, the most skillful predator will exploit the vulnerability in its prey, sneak in the back door. Perhaps already find himself in the innermost inner circle. Do the dirty deed. Rub the salt in the wound. And that’s how humans can be in simultaneity –collective and divided.

The political sure becomes personal when intimates default to tribe. That man with whom I shared a difficult but intense love, with whom I sold everything to consolidate in a new city, announced he had defrauded me in marriage. Watch me. He said. I'll take everything and more. How can that be? I asked. It’s complicated. He said. It’s not complicated. Rule of Law is intentionally opaque. That’s the scarcity model. Grab the power. Siphon off the top. He declared his intention to entrap me in a legal snare of cat and mouse. And he did. I expect you might want to murder me. He said. You ought not. You will be the first suspect. You don't want to get caught up in the system. He said. The litigation endured over 3 years. A dear friend told me jail is a good place to do a Phd. I met a realtor who told me Toronto has people to deal with people like that husband. I refused to roll over. The more I defended, the more determined the tactics. White supremacist looting? Cis hetero Patriarchal Capitalism? A centuries old global Ponzi scheme designed to syphon up? It’s intersectionality, right? My very own apocalypse. Kafkaesque. It happens all the time. World order is indifferent. Depravity does exist. I have read and reread on biopolitics –Angelou, Arendt, Fanon, Foucault, hooks, Maynard, Sontag, Agamben and Sun Tzu too. Do not be fooled. Justice is not the balance of truth blind with feminine purity. At its origin, the juridical order is a brotherhood designed to protect the powerful few in their exploitation of the (browner) many. He was a litigator by trade. He knew the system was bullish, racist and misogynist. Used this to advantage. It was calculated, deceitful –a baffling and painful betrayal. I became dismantled under predations and invasions. I suffered fear, untold losses and existential threat for my awakening to the machinations of the Canada system. I fell into nihilism. I held on with a thread and then the thread broke. I kept working. How could I not? Lawyers demand more money than an artist can reasonably supply.

During those difficult years I prepared the imagery from which I draw Scapegoat. The young strangers came into my studio self-selected from a Craigslist casting call disguised as poetry about youth, skin, colour brown, and life in the face of predation –world forces. Such powerful young men –hopeful, ambitious, determined, unbroken. I found myself lost in their sharing. Their shamelessness, courage, strength of spirit and sense for survival was palpable.

What is public and political is also private and personal. Over time Pietà uprooted itself from its statistical origins –became a kind of embodied ritual in relation. Late 2019, I became over identified with my subject. I closed the work and hired a new lawyer. He was young and kind and from the main stream. He saw through the husband's zero sum game –promised to shut it down. He called it squeaky and clean but nevertheless vexatious, a known form of abuse. Sociopathy is a clinical lack of empathy. I vacated my home and studio, handed over everything and more, and began healing. 2 years and a pandemic, I am regaining self-recognition. For that, I am grateful to covid for hitting the giant red pause button on the treadmill of survival.

​​Scapegoat cast are aged 18-28 years. The specimens that make up the skeletal set are examples that approximate the age stage of the youth who cradle them. This demographic is most highly represented in the global statistical record of victims of state violence. The youth, with whom I have staged this work are survivors of Toronto childhoods. They are sons of families who have fled violence of faraway homelands and seekers of brighter Canadian tomorrows. They are warriors in battle with a slippery anemic dragon that devours innocence, creativity and ambition. They are expert urban navigators and threat assessors –threat of disregard, threat of identity checks, threat of gun violence, threat of the policing henchmen of juridical indifference, threat of detention, carceral punishment, becoming lost, crushed by systemic forces. The portraits centralize his impassioned gesture. He is individual and collective, painstaking and sensually voiced. Within their diversity, they are presented in uniform. They are the Universal Soldier. A feminine presence embraces new life.

Scapegoat endeavors to lay bare the entanglements of (neo)Colonial order that insist rights onto some while withholding the same entitlements from others. Scapegoat gives voice to difficult realities of local culture while referencing traumas that descend through family lines and nomadic passages.

² Today is 01 November 2021. During the first 10 months of 2021 alone, 901 American people have been shot to death by US street cops in the service of public protection. 6,662 people have been shot to death since I began his work 01 January 2015. An overwhelming majority of people shot and killed by police are male –over 95 percent. More than half the victims are between 20 and 40 years old. I have learned about other times in history in which young men were dispatched to kill other other young men dehumanized to facilitate their disposal. https://www.washingtonpost.com/graphics/investigations/police-shootings-database/